Luminaries Answering the Call to Conscience 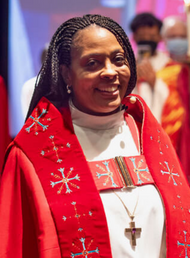 The Rt. Rev. Canon Paula E. Clark was elected on December 12, 2020 and ordained and consecrated on September 17, 2022 as the Thirteenth Bishop of the Episcopal Diocese of Chicago. She leads more than 30,000 Episcopalians in 122 congregations across northern and west central Illinois, and is the first Black person and the first woman to serve as diocesan bishop.
Clark was baptized into the Episcopal Church at age 10 by Bishop John Walker, the first Black dean of Washington National Cathedral and first Black bishop of the Diocese of Washington. She received her undergraduate education at Brown University and earned a Master of Public Policy degree from the University of California, Berkeley.

Before entering seminary, Clark served as a public information officer for the Office of the Mayor and the District of Columbia’s Board of Parole for nine years and spent five years as director of human resources and administration for an engineering and consulting firm in the District.

In 2004, she received a Master of Divinity degree from the Virginia Theological Seminary in Alexandria, Virginia, and served at St. Patrick’s Episcopal Church in Washington, D.C., and St. John’s Episcopal Church in Beltsville, Maryland, before joining the staff of Bishop Mariann Edgar Budde. Her ministry in Washington included clergy development, multicultural and justice issues, serving as canon to the ordinary and chief of staff. 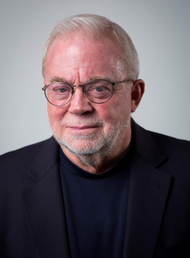 He is a globally respected writer, teacher, preacher, and justice advocate who believes the gospel of Jesus must be transformed from its cultural and political captivities; and always be “good news” to the poor and oppressed. He is a New York Times bestselling author, widely recognized public theologian, renowned speaker, and regular international commentator on ethics and public life.

He served on President Obama’s White House Advisory Council on Faith-based and Neighborhood Partnerships and has taught faith and public life courses at Harvard and Georgetown University. He also serves as a Senior Fellow at the Georgetown University Berkley Center for Religion, Peace and World Affairs. 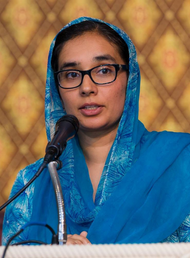 Navkiran Kaur Khalra, daughter of Shaheed Jaswant Singh Khalra is an Electrical Engineer by profession. She along with her family have been Human Rights advocates and highlighted the massacre of Sikhs in Punjab during and post-1984. Navkiran’s father – Jaswant Singh Khalra was a Human Rights Activists who investigated and highlighted the 25,000 unclaimed (Sikh) dead bodies cremated by the security forces of Punjab-India during 1980s and 90s. Jaswant Singh Khalra was later abducted and murdered by the Punjab Police led by KPS Gill in 1995 for disclosing the evidence against Punjab police in International forums.

Navkiran’s mother and Khalra Mission Organization then started a legal struggle to get justice for 25,000 unclaimed bodies and to convict the murderers of Jaswant Singh Khalra. The Khalra murder case took 12 years to sentence 6 cops to life imprisonment but the case of 25,000 unclaimed bodies or the wider question of justice to the Sikh community for the genocidal massacre done in Punjab and across India post-1984 still remains unanswered in the Indian courts.

Navkiran migrated to the US about 13 years ago for graduate school. She has collaborated with various human rights organizations interested to research and document the human rights abuses in Punjabi and has kept the legacy of her father alive by representing the Sikh cause to the Sikh Diaspora and other communities and human rights defenders.

The featured luminaries at the 2023 Parliament Convening are a diverse cohort of faith, spiritual, civic, and governmental leaders answering the call to conscience. Offering keynotes, prayers, and performances on the plenary stage, luminaries are committing to a vision of a world where democracy, freedom, and human rights are at the core of interfaith collaboration. New luminaries will be announced throughout 2023, see the growing list of luminaries here!

Experience the world’s largest and most diverse interfaith event coming to Chicago in August of 2023! Join thousands of faith, spiritual, and civic leaders from around the world in a shared mission toward justice, peace, and sustainability.

Register by March 31st and save with the Advance Rate, additional savings are available for students with ID and groups.