Parliament Calls for Prayers and Action after Sikh-American Attacked in Hate Crime | parliamentofreligions.org

Dear Friends of the Interfaith Community,

The Parliament of the World's Religions offers its prayers and sympathy to Inderjit Singh Mukker, a Sikh-American father of two who has become a face of international media this week after suffering a brutal, hate-fueled attack not far outside our headquarters in Chicago, USA. 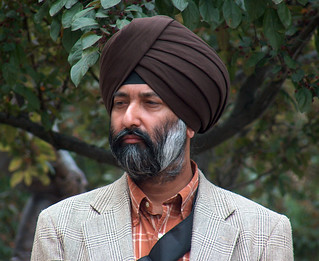 This latest assault is part of a pattern of anti-Sikh violence which devastates not only the Sikh community, but also the global interfaith communities who are hurting with Inderjit and his family today. Media reports suggest that the assailant began verbally abusing Inderjit with shouts of “Bin Laden!” and “terrorist” while he was driving to a grocery store in Darien, IL. The victim pulled over his car to stop and wait for the attacker to move on. However, the attack turned violent when the victim was pulled from his car and savagely beaten unconscious. He is currently recovering in the hospital while the young attacker remains unidentified.

Parliament Sikh Trustee Dr. Tarunjit Singh Butalia tells the Parliament, "On this 14th anniversary of 9/11, I am moved by my faith through the pain of this attack on a member of my community to work for a better world for all and to follow the teachings of our beloved Gurus that we are raised to embrace humanity with love and understanding, to educate about our faith, and to stand up for those who are suffering.

“The assault on Inderjit is among many I’ve observed against members of my faith living in our country, and that is why it is a great gift that the interfaith community welcomes partnerships with the Sikh community and is now sharply focused on building an international movement to eradicate hate and help all members of the global community live as neighbors in a safer world.”

The Parliament of the World's Religions opens its doors in little more than a month to thousands of experts and activists who will engage across hundreds of programs. Dozens of sessions in the “War, Violence and Hate” track at the coming Parliament will examine ways of achieving change on both local and global scales. The panel Hate Crimes Against Religious Minorities in the U.S will feature panelists speaking from Muslim, Jewish, and Sikh perspectives. Presenter Dr. Jaideep Singh will discuss his research, the first scholarly study of the Sikh-American experience of discrimination and violence. Additionally, the Parliament is bringing together presenters who have experienced this kind of hate in their lives and lost loved ones to the hate crisis in America.

We applaud the swift and sharp advocacy of several Sikh organizations in America, reporting incidents of hate crime against Sikhs and other religious minorities around the country, proposing practical responses and calls for change.

We call upon the interfaith community to join the response by spreading a love alert issued by the Sikh community. We also encourage those in attendance at the Parliament to participate in sessions about alleviating hate. Please offer your energy and love to the movement to transform fear, anger and hate into loving relationships in our homes, workplaces, faith communities and neighborhoods.

This reprehensible act is heart wrenching. I hope the assailant is captured, and I hope one day he is given the opportunity to experience the beautiful, kind, and generous hearts and spirits of the people of the Sikh faith. Those in my community send our love and healing energy to you. Let there be peace, and let it begin with me.

We condemn this attack and pray that God would recover quickly.

I am saddened to hear of this unfortunate attack on Mr. Inderjit Singh Mukker. I offer prayers for his speedy recovery and wellbeing.

On Saturday, February 29th, the Chicago Muslim Green Team is organizing a special workshop to introduce Citizen Science, a fun science-based activity for all ages and a great tool to build a better, healthier community...
[More]