The 2023 Parliament of the World’s Religions, hosted in Chicago from August 14-18, 2023, will bring together people of faith and conscience from around the world answering our call to defend freedom and human rights.

Luminaries Answering the Call to Conscience

The featured luminaries of the 2023 Parliament of the World’s Religions are diverse faith, spiritual, civic, and governmental leaders answering the call to conscience. The Parliament of the World’s Religions is honored to announce the participation of Rev. James Lawson, Prof. Azza Karam, and Dr. Arun Gandhi as featured luminaries of the 2023 Convening. 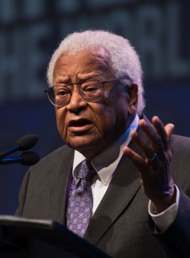 Reverend James M. Lawson Jr. (1928-) is widely recognized as the pioneer of nonviolence in the American Civil Liberties Movement. He is an activist, minister, and a scholar of the Bible, as well as a living icon embodying the power of nonviolence in securing justice and peace. Rev. Lawson’s major strategic work involved college students who were called to organize and defend the civil rights and defy the inhumane laws of segregation for securing human dignity and equity. Inspired by Mohandas Gandhi’s nonviolent methods in India, in the 1950s, Rev. Lawson led revolutionary sit-in workshops in Nashville, TN. Dr. Martin Luther King, Jr. described him as “the leading theorist and strategist of nonviolence in the world.” The movement was successful and resulted in the desegregation of downtown Nashville and became paradigmatic in other American nonviolent movements of the 1980s and 90s.

He lives in Los Angeles where he continues to teach and advocate for nonviolent social change. His books include Revolutionary Nonviolence: Organizing for Freedom and Nonviolence and Social Movements: The Teachings of Reverend James M. Lawson Jr. 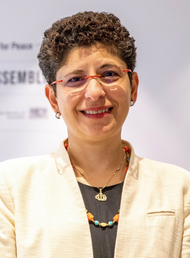 Dr. Azza Karam serves as the Secretary General of Religions for Peace – the largest multi-religious leadership platform with over 90 Interreligious Councils, as well as grassroots Interfaith Youth and Women’s networks. She also holds a Professorship of Religion and Development at the Vrije Universiteit in Amsterdam (The Netherlands) – of which she is a citizen.

She has served in intergovernmental, international, and non-governmental organisations since the early 1990s and has lectured in various academic institutions in Europe, North America (including the United States Military Academy/West Point), and in the Arab region. She has published widely on transnational political dynamics, including development, gender, and religion. 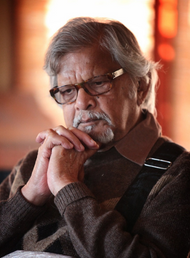 Arun Gandhi, a grandson of Mohandas “Mahatma” Gandhi, was born in Durban, South Africa during the apartheid years. At age 12, Arun was taken to India to live with his famous grandfather and learn ways to cope with anger and violent reactions. He learned some very valuable lessons during the two years that he spent with his famous grandfather. Arun says: Those two years changed my life for the better.

He founded the M. K. Gandhi Institute for Nonviolence in 1991 originally based at the Christian Brothers University in Memphis, Tennessee, and moved in 2008 to the University of Rochester, NY. The Institute has programs for inner-city children, inmates of correctional facilities, and poor families living in the inner city of Rochester. The Institute also teaches nonviolence to students.

Arun is now the President of the Gandhi Worldwide Education Institute to take the message of nonviolence all over the world and, to rescue and train children living in poverty so that they can break the oppressive cycle that crushes them generation after generation.

At the 2023 Parliament Convening luminaries offering keynotes, prayers, and performances join hundreds of program presenters and thousands of global attendees in committing to a vision of a world where democracy, freedom, and human rights are at the core of interfaith collaboration.

Register & Save with the Early Bird Rate

Register for the 2023 Parliament of the World’s Religions today and take advantage of a substantially discounted rate, the Early Bird Rate expires on December 15th! New luminaries will be announced in the weeks to come.

Answer the call to conscience, mark your calendars for the 9th Convening of the Parliament of the World’s Religions.