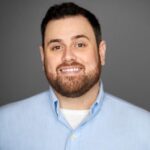 A Preface from Rev. Stephen Avino, Executive Director of PoWR

An avid seeker of knowledge and a dedicated person of faith, Rev. Stephen Avino earned a Master of Arts in Religious Studies at the Chicago Theological Seminary in 2015 and became ordained through the Independent Catholic Movement in 2019. He lives in Chicago, USA where he remains deeply committed to advocating for the legacy of the Parliament and a more inclusive interreligious movement.

You are being called. Last fall, we came together virtually in a time of crisis, but there is more work to do. This is why I am proud to announce that the theme of the 2023 Parliament of the World’s Religions is “A Call to Conscience: Defending Freedom & Human Rights.“

The Parliament is compelled to address the most pressing issue of our time. Freedom, human rights, and democracy are under attack all over the world. The Parliament started 2022 calling attention to the attack on the human right to vote in the country where the next Parliament Convening will be located and we have released a clear statement on the illegal invasion of Ukraine. These are just some of the myriad examples of current events that demonstrate a rise of autocracy. People of faith and conscience must stand up together in all their diversity and defend freedom and human rights.

At the 1993 Parliament in Chicago, the declaration Towards a Global Ethic affirmed human rights as defined in the 1948 Universal Declaration of Human Rights of the United Nations. The Global Ethic also states:

“After two world wars and the end of the cold war, the collapse of fascism and nazism, the shaking to the foundations of communism and colonialism, humanity has entered a new phase of its history. Today we possess sufficient economic, cultural, and spiritual resources to introduce… a vision of peoples living peacefully together, of ethnic and ethical groupings and of religions sharing responsibility for the care of Earth. A vision rests on hopes, goals, ideals, standards…. it is the communities of faith who bear a responsibility to demonstrate that such hopes, ideals, and standards can be guarded, grounded, and lived.”

This remains true three decades later. We must nonviolently guard and exemplify these ‘hopes, ideals, and standards’ and not let the world slip back into the old phase of history. It is our moral responsibility.

The 2023 Parliament Convening in Chicago will address the threat of climate change, the dignity of women and girls, the rights of Indigenous peoples, engaging the next generation, peace, justice, the reduction of inequalities, and more.  The Parliament continues to use the word “parliament” according to its archaic meaning: a safe place for civil discourse. It will be a place of open minds and open hearts where we can all express the wonder and dignity of our religious and spiritual traditions against the backdrop of the majestic beauty of Lake Michigan. But we could not do all this without addressing the foundational issue of our time; the threat to freedom and human rights. We must defend freedom and human rights together and find solutions to the rise of autocracy in our world.

PS: Stay tuned to your inbox, the Call for Programs is coming soon.